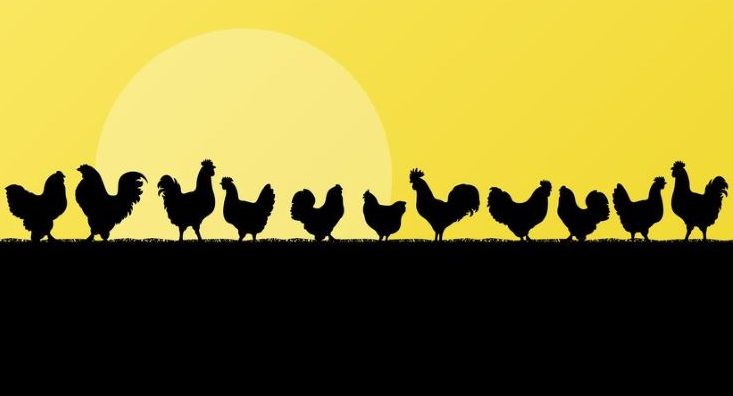 This blog was originally published on the Crisis Response site in February 2020, available here: https://crisis-response.com/Articles/593177/Free_range_thinking.aspx

On Sundays, I like to go to the local farmers’ market, not just for the opportunity to buy organic produce, but also for the social interaction and to have conversations about this or that. I feel that by supporting local farmers, I am helping to create an alternative to the overbearing supermarket industry that dictates to us all what our fruit and veg should look like – their size, colour and taste – or tastelessness. One Sunday I was buying some eggs and chatting with the elderly couple running the stall, asking whether the chickens which had laid such beautiful, organic eggs were happy in life? It seemed that the couple had been waiting for someone to ask this very question because they enthusiastically picked up the conversation and answered in such detail that I felt I had to write about it.

The lady explained how the family had kept a farm for decades and that, in the beginning, the chickens were kept enclosed and never saw natural sunlight. However, ten years ago, when their grand-daughter graduated from university and took up the family business, she had the buildings renovated and created conditions for the chickens to roam extensively in the grounds, to eat grass and bask in the sun. I bantered that the chickens must value their newfound freedom of movement and enjoy their new living conditions. But the husband replied that despite the opportunity to roam freely, most chickens didn’t leave the coop, preferring to live inside as they had for decades, although he couldn’t understand why this should be the case.

I was also puzzled, and it made me think. After all, we’re talking about a completely new generation of chickens. Those chickens who lived locked up a decade ago – and even perhaps their ‘grand-chicks’ – have long since died, but today’s chickens retain the persistent behavioural inertia of their ancestors. I began to think about people, about myself, and how we also display some of the same chicken-like tendencies. Like them, we sometimes ignore the alternative, preferring that to which we have become accustomed, despite whether or not it is useful or makes us happy.

Just like the chickens, the inertia of our parents, ancestors and society bears influence on us. Most of us live our lives according to well-trodden paths, following the example of others and their recommendations, reinforced by the majority opinion. And we condemn those who challenge established social foundations, even those which no longer make sense or even cause harm, with an arsenal of ready-made stigmas. We make up names for them like ‘white crow’, marking them out as ‘other’ or labelling them as ‘trouble-makers’. From birth, we find ourselves navigating life within a multi-layered social regulatory mechanism that shapes our behavioural norms through our belonging to a particular social group. Our behaviour is regulated through the traditions and customs fashioned by that social group and passed down from generation to generation. And the system for disseminating that accumulation of human experience, knowledge and skills developed throughout our evolution has been honed so skilfully that we have developed a single word for it – education.

Education has become more accessible than ever before, and we are guided towards higher education on the promise that this will open up our life options and bring a better quality of life overall. Yet at the same time, education has turned into a factory conveyor, mass-producing identical products. This is the paradox of modern education, particularly the humanities, as reams of stamped certificates are handed out as evidence of ‘knowledge’ and a qualification to act, yet through this conveyor we have lost the approach to learning where the main acquisition of knowledge takes place through practice and through the teacher-student hierarchy, and being taught to question everything.

Instead, the modern education industry has built a successful marketing model appealing to an assumption of self-belief, selling us the confidence that ‘you can do it’. Young people buy into this idea, ignoring the fact that we all have natural limits, not only in our perception of the world and our understanding of many things, but also our practical limits. And we spend a lot of money, time and energy to acquire knowledge and skills, the possession of which then becomes one of the most powerful mechanisms for preserving behavioural norms such as we have seen with our chicken friends.

The human psyche works in such a way that we begin to cherish the knowledge that we have acquired – sometimes with great difficulty and at a high price – and we begin to treat it as a kind of property, carefully protecting our ‘knowledge’, to prove to ourselves and others the value of our intellectual resource, the fidelity of our logical thinking. In the meantime, we completely lose sight of the fact that we can only ever have partial knowledge; we will never be omniscient. Moreover, under the influence of aggressive ‘you can do it’ messaging and feeling the pressure of societal expectations – and indeed those of our employers, who have also bought into the ‘you can do it’ social contract – we have to do everything possible to live up to the assertion, even when in dialogue with ourselves, we realise that the model of the world that we have colluded in creating does not coincide with objective reality.

I do not deny that ‘you can do it’ messaging is important in encouraging those who spend their early lives having the exact opposite message drummed into them, in particular those social groups who are actively discouraged from any sense of entitlement, or those who are inherently shy and unsure of themselves. But for those who have grown up being told they can do anything, such marketing can play a cruel joke.

A friend of mine recently resigned from teaching conflict studies at one of the world’s prestigious universities. She said that she has made her contribution to myth-making and that her departure is her contribution to minimising the number of graduates who, on graduation, think they have learned all there is to know about how to resolve world conflicts and are ready to go and build peace in practice.

Another friend, a non-profit Director, was in a discussion with a young graduate from another of the world’s top universities who he was thinking of hiring. He was extolling the importance of facilitation skills in planning dialogue processes and in peacebuilding more generally, only to be asked, quite sincerely by the graduate: “What is facilitation?”

Perhaps this system of knowledge transfer could work if not for our peculiar belief that information is finite – which in turn limits our potential and makes our actions predictable and open to manipulation. In this respect, we resemble those chickens who remain cooped up for decades, perhaps occasionally fighting for a bigger cage, but with no real desire to step outside where the sun shines bright and the grass is green and luscious. As a result, we are infantilised and continue with ‘business as usual’ even in the face of threat to life, ignoring that everyone in the chicken coop is in real danger in the face of climate change and catastrophic pollution of our environment, for example.

Aristotle and Einstein both recognised the paradox that the more you know the more you realise you don’t know. We need to be reminded of this, to keep asking questions and challenging our assumptions. We even need to learn to be comfortable in our wisdom to admit that ‘maybe I can’t do it’ and collaborate with those who can instead. Stepping outside the coop and reflecting from a different perspective might unsettle our certainty, but is essential for progress.